What is a Fixed Annuity?

A fixed annuity is a contract between an individual and an insurance company that, in return for one or more contributions, can pay out a regular income for a set amount of time, or even for the remainder of the income recipient’s lifetime.

How Does a Fixed Annuity Work?

Fixed annuities pay a stated amount of interest that is guaranteed for the contract period you choose. Example contact lengths are 3, 5, and 7 years. Although the interest rates may change at some point in the future, it will not fall below a “floor,” or minimum.

When (or if) the annuitant – or income recipient – is ready to start accessing the amount of money accumulated, they will typically have several options to choose from. For instance, the entire amount of the contract may be withdrawn.

Alternatively, an income stream may be chosen that continues for a stated number of years, or for as long as the annuitant lives guaranteeing lifetime income. Many of these financial vehicles also offer a joint income option where cash flow continues until the death of the second recipient.

Are Fixed Annuities a Good Investment?

The funds that are inside of a fixed annuity are allowed to grow on a tax deferred basis. This means that no taxes are due on the gain until withdrawal. Over the years, this tax deferral can allow the account to compound more than that of a taxable account.

Although the growth that takes place with these financial tools is considered low they will be higher than a savings account and most CDs, the principal – and all of the previous gains – will be protected, regardless of what happens in the stock market. That is why fixed annuities may be a good financial tool for investors who are risk-averse.

Can you lose money on a fixed annuity?

You can not lose money in a fixed annuity. Interest rates are guaranteed for a specified period of time chosen when you purchase the annuity contracts. They offer a guaranteed rate of return on your investment.

A fixed annuity can be either immediate or deferred. The immediate type is typically funded with one lump sum, either from personal savings or by “rolling over” funds that are in a personal IRA or an employer-sponsored retirement plan such as a 401(k). The income will then begin immediately or within 12 months of purchase.

The deferred version starts to pay income in the future, and has two distinct “phases.” These are the accumulation phase, and the “decumulation,” or income payout phase.

During the accumulation phase, contributions may be made via one single lump sum, or through multiple deposits now and in the future.

Throughout the accumulation phase, the growth that takes place is deferred. This means that it is not subject to taxation until the time of withdrawal – which could be at a time long into the future.

Fixed annuities pay a set rate of interest, and they will not incur loss – even if the stock market goes down. This means that all contributions, as well as any past gains, will not lose value.

Fixed annuities provide a set amount of income over a stated amount of time. This, too, will not be impacted by a downward moving stock market. The guarantees can provide certainty for retirees who are counting on this regular stream of income. Knowing that they can count on regular income also allows retirees to focus on other things, like spending quality time with friends and loved ones.

There are usually several income options to choose from with a fixed annuity. These can include Life Only, Period Certain, or Life with Period Certain. The Life Only income option will continue paying income for the remainder of the annuitant’s life, regardless of how long that is.

With the Period Certain income, a stream of cash flow will continue to a stated time frame, such as 10 or 20 years. If the annuitant dies before the time has elapsed, income will continue being paid to a named beneficiary for the remainder of the chosen income option.

Within the category of fixed annuities, there are several sub-categories. These include:

These financial products include several guarantees. These include the interest rate (which could be changed in the future but will not ever fall below a stated minimum, or floor), as well as a reliable stream of income that arrives for a specific time, or even for the remainder of the recipient’s life.

An MYGA has a stated interest rate for a pre-set time frame, such as 3 years, 5 years, or 7 years. As with other annuities, the gain in an MYGA is tax-deferred.

Once the interest rate guarantee has elapsed, the investor can typically either reinvest at a new rate and guarantee schedule, or they could instead take withdrawals or income payouts penalty-free.

FIAs are structured like regular fixed options. The biggest difference between the two types is the way in which the return is calculated. For instance, an FIA will typically track one or more market indexes, such as the S&P 500.

When the underlying index performs well in a given contract year, the account is credited with a positive return – usually up to a stated maximum, or cap. But, if the index does not perform well and generates a loss in a given contract year, the annuity won’t decrease. Instead, it is simply credited with a guaranteed minimum that is typically in the range of 0% to 2%.

Like other annuity types, the gain that is generated in a fixed indexed annuity is also waived until withdrawal, so there is no tax due until withdrawal. Over the years, the value of the annuity could be substantial.

Fixed indexed annuities also provide an income payout that can be generated for a set number of years, or for the remainder of the annuitant’s life, no matter how long that turns out to be.

A single premium immediate annuity, or SPIA, is funded with one lump sum, and pays out income for a pre-determined length, or for the recipient’s life. These annuities are oftentimes appealing to retirees who roll over their savings from an employer-sponsored retirement plan and/or IRA (Individual Retirement Account) and create an ongoing income stream.

If the contribution to a SPIA came from a traditional IRA or retirement plan, then it is likely that 100% of the income will be taxed. However, if the SPIA contribution comes from personal savings, only a portion of each income payment will be taxable at the recipient’s then-current income tax rate.

In addition to tax-advantaged growth and guaranteed income, fixed annuities can offer additional benefits, too, such as a(n):

Many fixed annuities include a death benefit. That way, if the annuitant dies before receiving all of his or her original contributions back, a death benefit will be paid to a named beneficiary. Unlike the tax-free proceeds from a life insurance policy, though, an annuity death benefit can be taxable.

Some fixed annuities will also include a long-term care waiver. With this benefit, funds can be accessed penalty-free from the annuity – even before the surrender charge schedule ends – in the event that the annuitant has to reside in a nursing home facility. Typically, there is a minimum length of confinement in the facility, such as 90 days or more, that must be satisfied.

The withdrawals or income that is received from an annuity may be fully or partially taxable. This can depend on whether the annuity contract is qualified or non-qualified.

Withdrawals that are generated from a qualified annuity will typically be 100% taxable at the recipient’s then-current income tax rate. This is because if the funds were contributed pre-tax, and the growth was shielded from taxation, none of the money has been subject to taxes yet.

While most fixed interest annuities do not charge excessive fees, there are some charges to be mindful of if you are going to purchase a fixed annuity. These can include the cost of adding various riders to the contract, as well as surrender charges if you access more than a maximum amount of the account value during the first several years after purchasing the annuity.

A rider is an additional benefit that is added to an insurance policy or an annuity. In some cases, there is no additional premium charged, whereas others may require you to pay. For instance, an enhanced death benefit or an inflation rider may cost an additional amount of premium. Before adding any rider to an annuity, it is important to make sure that the additional benefit is worth the added charge.

Most annuities have surrender charges. This means that if you cancel, or “surrender,” the contract within the first several years of purchasing it, you will incur a penalty. Because of this, you could receive back less than you contributed.

Many annuities allow some amount of liquidity – even in the early years. For example, oftentimes, up to 10% of the contract value may be withdrawn each year without incurring a charge.

The amount of the surrender charge will typically decrease every year until eventually, it reaches 0%. After that, funds can be accessed from the annuity penalty-free. (However, there may still be taxes owed – and, if the annuitant is under the age 59 ½, they may also incur an additional 10% early withdrawal penalty from the IRS).

Pros and Cons of Fixed Annuities

Annuities that are fixed offer many attractive features. But even so, these financial vehicles are not a good alternative for everyone. So, it is important that you understand all of the pros and cons before making a long-term commitment to a fixed annuity.

Some of the key advantages can include:

Some of the main drawbacks to consider with a fixed annuity are:

Is a Fixed Annuity Right for You?

Most financial vehicles offer at least some enticing benefits – but unless those fit with your particular goals, certain tools may not necessarily be a good fit in your portfolio. With that in mind, doing some research before you make a long-term commitment is recommended.

How to Narrow Down the Right Fixed Annuity

There are many different annuities available in the marketplace today. But not all annuities are exactly the same. They can differ by product type, as well as by the insurance company they are offered through. Because of that, it is essential to do some “comparison shopping” in order to narrow down the best annuity for you.

The first step in this process should be to clearly define your short- and long-term financial goals. You should also eliminate any annuities that do not fit well with your risk tolerance and your anticipated retirement date.

Work with an Independent Annuity Specialist

Working with an independent annuity specialist like Insurance Geek can help you to find the best annuity for your particular needs. While “captive” advisors can only offer you the annuities that are on their insurance companies’ “shelves,” an independent annuity expert can shop and compare annuities and rates from multiple carriers in order to find you the highest paying fixed rates and boost your retirement income.

In addition, we can show you the financial strength ratings of the carriers so that you can also narrow down the right insurance company to deal with.

At Insurance Geek, we are affiliated with more than 40 top-rated insurance companies, so we can work to “customize” a plan that is tailored to your needs, both before and after you retire. 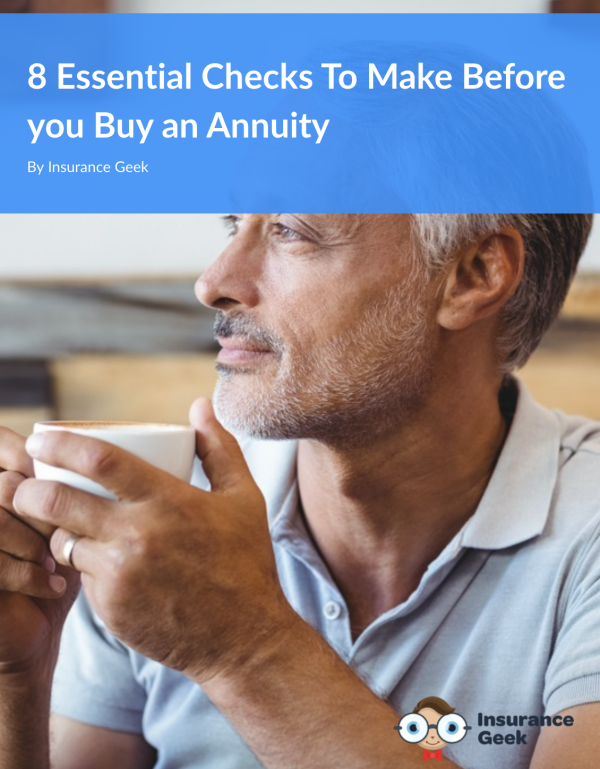