After a number of states legalized the use and sale of recreational marijuana, the statistics of crash rates spiked compared to other Western states.

The legalization of recreational marijuana had a significant impact on the safety of drivers who sit behind the wheel under the influence – and those who find themselves on the other side of the road.

According to recent data from the Highway Loss Data Institute (HLDI) and the Insurance Institute for Highway Safety (IIHS), US states that have legalized marijuana for recreational use – California, Colorado, Nevada, Oregon, and Washington – saw an increase in injury crash rates.

Today, we’ll tackle the statistics of crash rates in states that legalized marijuana and see which states are at a higher risk of having emergency rooms filled with injured drivers – and share more information about road safety.

The legalization of marijuana use and retail sales have resulted in a growing number of fatal crash rates and injured drivers in a number of US states. Click To Tweet

What Percent Of Accidents Involve Marijuana?

More than a third of US states have legalized the recreational use and retail sales of marijuana for people 21 and older – and 68% of American adults favor legalization.

With the approval rates, the use among those who are legally allowed has spiked, doubling the percentage from 6% to 12% from 2018 to 2019.

Marijuana legalization new studies indicate that the number of fatal crash rates has not ceased, with around five Western states recording a 6.6% increased crash risk and 4% fatal crash rates compared to states that haven’t legalized the use of marijuana.

US States That Legalized The Use Of Recreational Marijuana 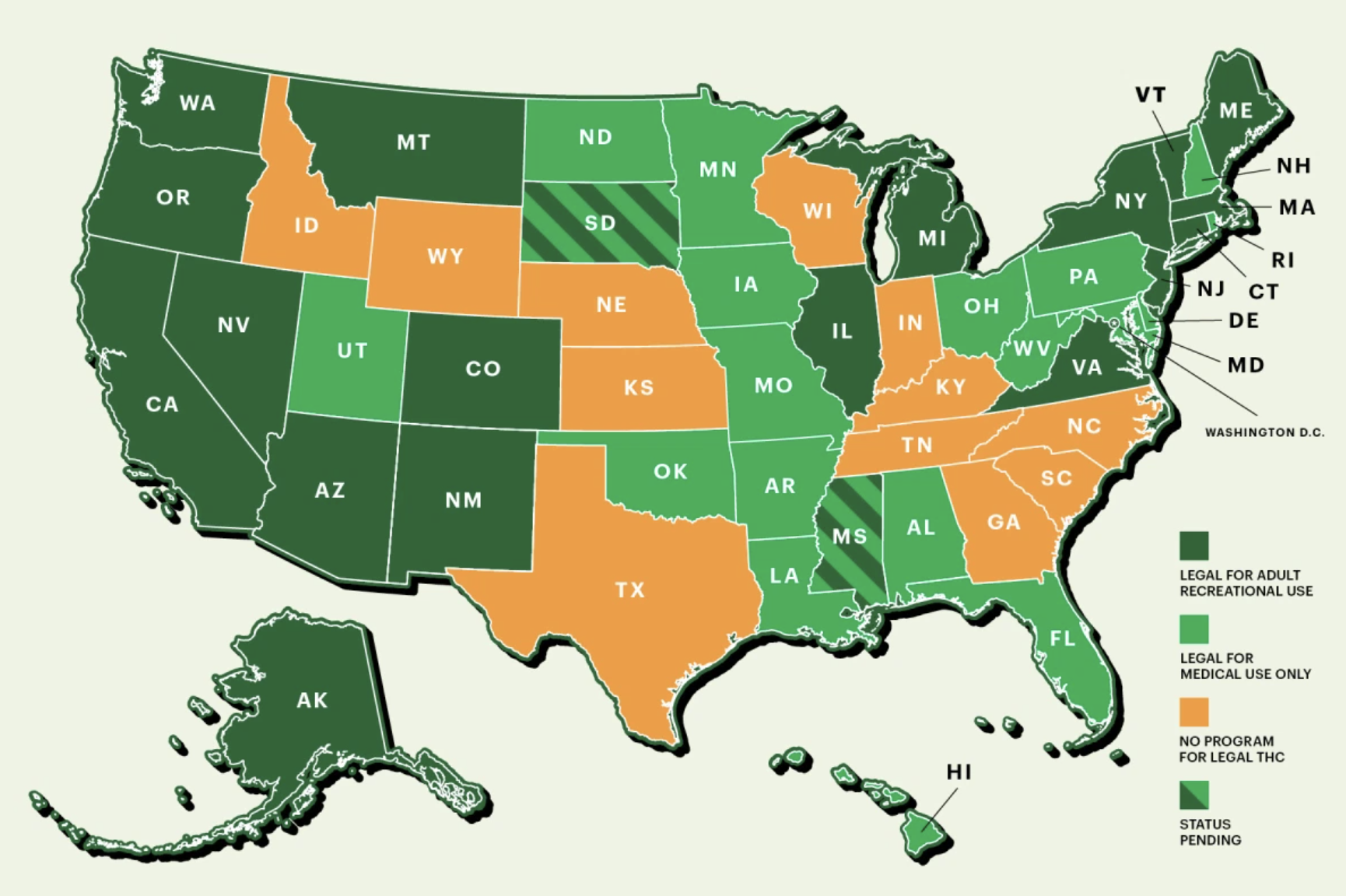 A number of US states have legalized recreational marijuana use, denying the impact it has on dangerous driving behaviors and evident car accident rates.

Here’s a list of states that legalized marijuana laws so far:

The provisions also outline whether the individual can grow their own marijuana, the amount they are allowed to consume, and how tax revenue is spent.

According to the early evidence from the Insurance Institute for Highway Safety, the following states have witnessed an increase in control drivers testing positive and crash-involved drivers: California, Colorado, Nevada, Oregon, and Washington.

According to the police department, records have shown marijuana-impaired drivers put traffic safety in jeopardy. The manager for Colorado’s Department of Transportation claims that 8% of total fatal crashes were caused by drivers impaired by marijuana.

A separate IIHS study suggested that Colorado has witnessed 1.46 deaths per one billion caused by marijuana intoxication.

Safety professionals suggest that 5 nanograms of THC results in difficulty maintaining control over the vehicle, resulting in human and economic losses.

The state of Washington and Highway Safety (IIHS) has also approved the use of marijuana in 2012. Adults are allowed to possess and buy up to 1 ounce of marijuana.

As for the Highway Loss Data Institute, the data collected puts Washington in a slightly more favorable position in terms of police-reported crash rates. It shows fewer attempts – with early evidence showing 0.88 billion deaths per one billion per year since the legalization year.

An estimated 21% involved in fatal car crashes since 2017 in Washington were individuals who tested positive for an intoxicating amount of THC in their bloodstream.

Overall, injury crash rates have risen from 4% to 14% since the legalization.

As Oregon legalized marijuana for recreational use, the Loss Data Institute (HLDI) and state officials worry that it would increase the number of casualties who have visited the emergency rooms.

An increase in injury crash rates wasn’t the case in Oregon, though. In 2015, there were 8.5 fatal cases where drivers involved in crashes self-reported marijuana use.

In California, individuals 21 and up are allowed by law to possess up to 1 ounce of marijuana – or 8 grams of concentrated cannabis.

In the attempts to research the control drivers self-reporting, the data showed an increase from 9% to 18% in marijuana-affected crash rates. Even more so, about 149,902 people were arrested for a DUI – involving both alcohol and a positive test for marijuana.

Nevada residents can possess or buy up to 1 ounce of marijuana. However, it’s against the law to use it in public or in a car.

Nevada’s DUI statistics show a slight rise in traffic casualties. Determining the exact number of injuries due to intoxication from marijuana is not possible since the state doesn’t have a system that separates the nature of accidents.

Driving simulator tests showed incidents happening due to consuming alcohol, marijuana, and other substances, though.

Traffic Safety: How Likely Are You To Crash While High?

The Institute for Highway Safety has conducted research about the likelihood of drivers getting involved in accidents while under the influence of marijuana.

The results of this survey showed an interesting fact:

Such tests revealed that 13% of drivers involved in a car accident tested positive for marijuana. It’s worth noting that marijuana legalization may act as an incentive to use this substance with alcohol, further leading to increased motor vehicle crashes.

Does Marijuana Interfere With Auto Insurance?

Medical marijuana CAN, in fact, interfere with your auto insurance coverage – especially if you are caught driving under the influence. Of course, that also depends on the state and the individuals filing the charges against impaired drivers.

And according to statistics and insurance records, collision claim frequency compared to other states has changed.

There was a spike in the need for collision coverage insurance claims by 12.5% since the legalization in Colorado.

Drivers should know that marijuana can remain in their bloodstream for up to a week – and the exact time of impairment is difficult to pinpoint for law enforcement and best car insurance companies alike.

The legalization of marijuana spiked the number of fatalities across the US.

Drivers who use marijuana react more slowly, make more errors, and may struggle to maintain the car’s position. Then again, they also tend to drive at slower speeds.

States in which recreational marijuana use has been legalized have witnessed a rise in traffic casualties and fatal incidents, as shown by the Insurance Institute.

Now that we’ve outlined crucial information regarding how marijuana use was linked to crash-involved drivers who visited emergency rooms since the legalization, we’d like to add one more thing:

Drivers must know that driving under the influence can affect your auto insurance – including collision coverage.

At Insurance Geek, auto insurance is one of our specialties. Compare auto insurance quotes with our free quote tool and pick the coverage that fits your budget and needs.

About the Author: Brad Cummins

Brad Cummins is the Principal Agent at Insurance Geek LLC.